After the dubious company I kept in FATE Magazine, I found something that would befit the visiting scholar status I was enjoying at MIT.  I saw a color picture of a Boxer with a one paragraph note in USA Today (Winner of the Pulitzer Prize for Best Investigative Paragraph) that told me that the genome of a Boxer was being analyzed at MIT. Flashing my visiting scholar credentials got me into the story, and the AKC Gazette published it.

What was impressive about the article was how good they made it look.  Clearly, they were more visually oriented than FATE Magazine.  Of course, when you are focusing on the paranormal, you probably aren’t running lots of sharply focused photographs.

At the very end of the article, I mention both Judy and Honey.  Honey lived another decade after the article was published, until she passed at 14 years of age, in January 2014. We miss her every day.

That is unusually old for a Boxer, for reasons explained in the article.  I guess Honey had good genes.

To write the article, I had to go back to high school biology texts, and try to explain genetics in a manner accessible to normal readers.

The only biology I took in college was Human Reproductive Biology.  The course was a way for UNH to compensate for the absence of decent sex ed in New Hampshire high schools (Motto- Live Free and Have an Unwanted Pregnancy).

Judy and I took the course, which was broadcast across the campus to various classrooms, because so many students enrolled (The course was supposed to be a gut.)

I tired of going to the remote classrooms, but Judy kept on going.  Ever the opportunist, I read her notes, looked at the highlighted material in her books, and then took the same tests she did.

I remind her of that as often as necessary.

In any case, here’s the article: 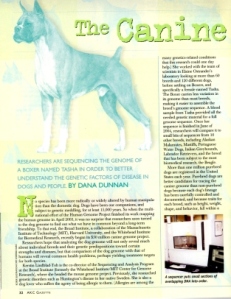